Aggressive driving plagues Orange County. Stressed, irritated, and impatient drivers face traffic jams and slower drivers that eat into their time and make them late. Some motorists take their frustrations out on the road and become aggressive drivers.

If you or a loved one has suffered because of a crash caused by an aggressive driver, you have legal rights. No one can drive dangerously and leave a wake of damage without liability. Nordean Law’s aggressive driver litigation attorneys win their clients 100% of the compensation to which they have a legal entitlement.

What Is Considered Aggressive Driving? 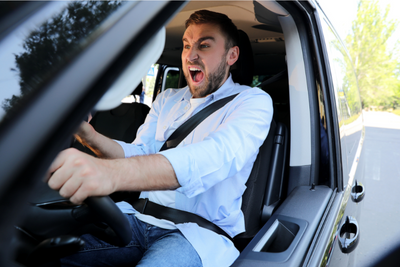 According to the Insurance Information Institute, aggressive driving ranks #1, causing collisions and fatalities. No aggressive driver should be able to evade responsibility for their actions. However, unlike a typical accident, where drivers make honest mistakes, aggressive driving accidents occur because someone decides to be reckless and endanger others.

For instance, a driver speeding while tailgating another driver, blowing his horn, and yelling obscenities is an aggressive driver. This person engages in a pattern of conduct and legal violations that endangers other people and property.

The most common forms of aggressive driving include:

Pure comparative negligence governs California’s personal injury law. According to this standard, each party to an accident has a share of the liability from 0% to 100%. Based on its estimation of the collision’s cause, juries either find one party 100% accountable or split the liability in a suitable proportion. For example, a jury may find the defendant 80% liable and the plaintiff 20%. When this is the case, the plaintiff’s award is reduced to 80% of the damages.

Defense attorneys and insurance companies typically claim the plaintiff bears a large portion or all of the liability, even when this is the furthest thing from the truth. They hope to use comparative negligence as a cudgel to force the plaintiff to settle for less than the full amount due.

They may even try this when the defendant caused the accident through aggressive driving.

Aggressive drivers cause massive mayhem on Orange County roads. Because of their excessive use of speed, penchant for driving dangerously close to other vehicles, and disregard for traffic laws, aggressive drivers tend to cause accidents with severe injuries and fatalities.

Common injuries caused by aggressive drivers include the following:

How Much Compensation Am I entitled To If The Driver Caused An Accident?

The type and severity of defective airbag injuries depend on the impact of the collision and the type of airbag failure experienced. For example, an airbag with too much velocity may cause vision impairment, while a failure to deploy in a high-speed crash may result in broken bones, paralysis, or death.

The range of injuries is broad, including the following:

HOW CAN NORDEAN LAW PROVE THE ACCIDENT CAUSED DUE TO AGGRESSIVE DRIVING?

Nordean Law fights back against these unfair practices. Evidence of aggressive driving on the part of the defendant is often pivotal.

For example, an aggressive driver may have tailgated a slower vehicle, then abruptly passed and intentionally swerved into the other vehicle’s lane at an absurdly close distance without signaling. Drivers who do this generally have some form of road rage and drive recklessly to punish people they feel get in their way.

If this conduct caused an accident, it’s the fault of the aggressive driver passing in an unsafe and illegal manner. However, the defense may contend that the plaintiff caused the accident by speeding, even when this is complete nonsense.

At Nordean Law, we have experience handling all types of car accident cases. Our car accident lawyers at Orange County are experienced trial lawyers and aggressive negotiators. We never stop fighting for your best interests in a courtroom or during settlement negotiations. Our legal team answers your questions and concerns as we guide you through the personal injury claims process.